Santa Claus, Indiana is a town in Spencer County. It’s based in three townships: Harrison, Clay, and Carter. Upon its establishment in 1854, it was called Santa Fe. It changed to its current name about forty years later when it was discovered that the name Santa Fe was already taken by another Indiana community. Today Santa Claus has a population of approximately 2,500 residents.

Santa Claus, also known as “America’s Christmas Hometown,” is where you can bask in a Christmas-like atmosphere without venturing to the North Pole. Due to its popular name, its post office gets several letters from children worldwide each year during the Christmas season. There is even a group of volunteers called Santa’s Elves who make sure that each child gets a response from Saint Nick. This tradition has been going on for over 100 years. A well-known attraction in this town is Holiday World and Splashin’ Safari. It has a steel roller coaster, a wooden roller coaster, wave pools, and more. You can learn about the town’s history at Santa Claus Museum and Village. Some of its exhibits include Holiday World archives, antique toys, the history of its post office, and other remnants. Lake Rudolph Campground and RV Resort is a must-visit for the whole family. This facility has a playground, a waterpark, cottage and cabin rentals, and kayaks. Though it is undeniably a family-friendly community, there aren’t any schools in Santa Claus, so students attend schools in nearby towns like Lincoln City and Dale.

Consider moving your family to Santa Claus. Living in this lovely, yuletide atmosphere is akin to celebrating Christmas every day of the year. If you have questions about homes for sale in Santa Claus, Indiana, feel more than welcome to reach out to me.

Great wooded lot in Christmas Lake Village to build on or use for access to amenities such as boating, fishing, water skiing, kayaking, walking, playgrounds, and more. Lo...

Check out this quality built home with its cabin-esque feel located in Christmas Lake Village. Built in 2013, this 3 bedroom 2.5 bath home was built with quality in mind....

Very nice wooded lot in Christmas Lake Village. This lot is in a convenient location close to Christmas Lake. Great building site with close proximity to both gates. L...

**Private Gated Community** Must have appointment. Come build your dream home on this beautiful lot situated in the very desirable subdivision of Christmas Lake Village S...

Nice building lot with plenty of trees and close to the walking trails, and park areas.

If you ever dreamed of owning a restaurant, now is the time. With a new addition for seating and a brand new kitchen added in 2017, this is a profitable company in a grea...

Lakefront home on Christmas Lake. This home is all brick and has great views of the lake. As you walk into the front door you will be welcomed by the wall of windows that...

Nice wooded lot very close to both entrances of Christmas Lake on a quiet back street with fields behind the lot.

Enjoy tranquility on your new lot located in Christmas Lake Village. All wooded lot with no culverts or ditches, perfect for someone wanting to build a house with a walko...

This is an amazing home with great space for your family both inside and out. If you like the feel of spaciously sized rooms and having the ability to spread out this is ...

IDX information is provided by the Indiana Regional MLS and is exclusively for the consumers' personal, non-commercial use and may not be used for any purpose other than to identify prospective properties consumers may be interested in purchasing. Data is deemed reliable but is not guaranteed accurate by the MLS. 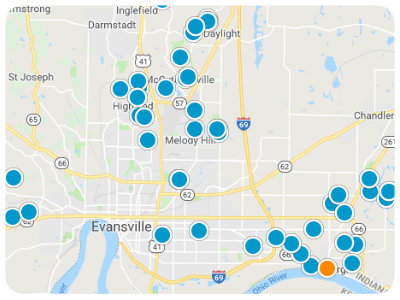